Be a shark whisper: How to take care of your need for money and profit 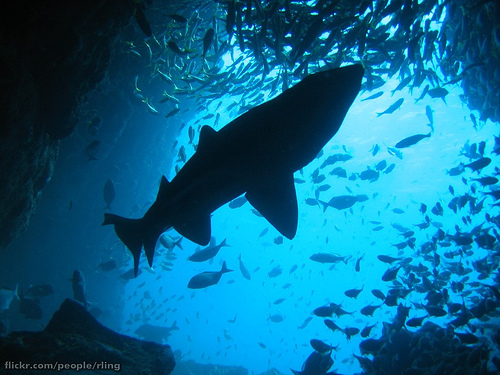 This morning, after my meditation and during my customary focusing session, I encountered my inner shark.
She came to me as a gripping in my upper jaw, which evolved into an image of tightly clenched shark’s teeth. I said hello, and invited her to show me how she wanted me to be with her.
Instantly I saw that she wanted to be accepted, integrated, even loved. And I immediately encountered the sharpest resistance. The shark, from my perspective, was greedy, grasping, devouring. She showed up in my business as a crass, even vicious, pursuer of income. I felt I had no choice but to cage her.
Still, I stayed with her, and the floodgates opened. Image after image flooded my awareness as I saw how I muzzled, rejected, caged, criticized, shamed, resented, and denied my inner shark. The sense of hurt was palpable. Though I could not imagine integrating this ugly creature, it was clear to me that denying her was utterly wrong.
So I asked how she wanted me to be with her. The image came of the Whalerider, and I saw myself lying on the shark’s back, gentling her. As we swam, I saw myself feeding her on legitimately earned profits instead of abandoning her to forage among hapless victims of my fear and grasping.
I saw that the shark could be tamed, providing I agreed to be tamed in return.
Taming the shark means being responsible for earning a good living. It means honoring her needs instead of denying them. It means acknowledging my shark nature and gentling it instead of whipping it into submission.
I guess you could say I’ve been called to be a shark whisperer.
And you? What does your inner shark need today?
Photo by richard ling via Flickr
Under a Creative Commons License