Confessions of an info junkie 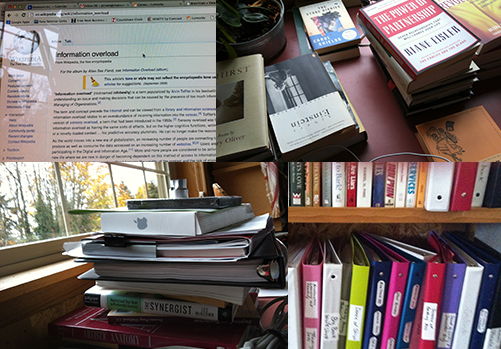 My name is Molly, and I am an information junkie.

I started using information to feel good about myself and to make myself safe when, in the first grade, I received an “A” in Phonics. My parents were incredibly proud. From that moment on, I consciously sought out information. I made it a point to consume some daily. To the outside world I appeared precocious, studious, disciplined. On the inside I was becoming an addict.

The first time I was questioned about my compulsive reading was 1961. I was sprawled on the couch reading my second Nancy Drew mystery of the day when my mother accused me of “consuming” books. What could she know? As my tolerance increased, I switched from Carolyn Keene to Charles Dickens to Frederick Nietzsche. I read historical novels and biographies. I consumed three or four news magazines each week. But in time, information turned on me. I started compulsively reading potboilers. Some times I read the personality assessments in women’s magazines. At my lowest, I read the good parts of Cosmo. (But I never read romance novels. That’s something.)

In the mid 1980’s I achieved a sort of balance. I managed my habit, using only at work, where I consumed computer and software manuals along with business and technology magazines. There were slips, like the week I read an Andrew Greeley novel at my desk while pretending to be studying typography. But by and large, I kept things under control. The maintenance phase of my addiction continued through the early 90’s with occasional binges when I changed jobs or learned new skills.

My tenuous equilibrium was shattered by the Internet. Overnight, I became an out and out junkie. I checked email at 3:00 a.m. I downloaded (and printed) manuals, documents, and educational materials. I was raking in information faster than I could consume it, and storage became an issue. Yet, mad as it may seem, I continued. My only concern was that there was so much information that was getting away. What if I needed it someday? What if it became scarce and expensive before I collected it?

I was now blindly addicted to hoarding information, irrespective of its relevance or of my own capacity to digest it. Once or twice a year I would surrender, my spirit bent under the burden of so much information. I’d sort through the stacks of print-outs, and, averting my eyes, throw reams of paper into the recycling bin. I’d make binders for the reams that I felt I might really “need,” and I’d make a folder for the stack I considered priority reading. Usually this was recycled six months later, unread. As soon as I cleared away enough information that I could breathe, I was off again.

This cycle has repeated itself at least twice yearly since 1995, though, with time, I have learned to store documents in temporary files or on two 150-gigabyte external hard drives. These days, I only print out “priority reading” materials, which reside in eye-catching red folders, enduring the fruitless transfer from desk to bedside to briefcase to desk many times, before, dog-eared but largely unread, they too are recycled.

I’m tired of living like this. I want to go back to the times when reading was a joy, when I’d spend an afternoon with a book of poems instead of briskly riffling the pages to find “something good.” I want to be challenged, moved, engaged, outraged by what I read. These days I too often feel simply overwhelmed.

My wise friend Arlene Hetherington once mused that there is more than one way to live in scarcity, and that hoarding information can be as harmful to the soul as hoarding money or time. I, for one, am sure that she was correct. So it is that I share with you that my name is Molly, and I am an information addict.

Last night I truly wanted to learn something about the Enneagram. I went into my office intending to get a single book, looking forward with clear intention and a sense of lightness, to connecting with (rather than decimating) its contents. Before I left the office, I had 12 books in my arms. To my credit, I put eight of them down and took only four up to bed, still the act of selecting (or not selecting) had stimulated my gluttony, and by the time I was ready for bed, any authentic appetite was gone.

This morning I drove home from my swim in Puget Sound, a ritual that restores me to sanity, intent on abstaining from information acquisition. When I stopped at the post office, three books were waiting for me. At home, I found a gift from a dear friend on my porch. Yes, it was a book. At the office, I found two notices to pick up holds at the library in my email along with five not-to-be-missed newsletters that will reside in my “to read” box until I delete them unread. And oh, there was a note from Integral Naked to upload the latest audio, a quote of the week from Andrew Cohen, and another quote from Chogyam Trungpa. And then there was the notice to download this week’s New Republic, and several listserv messages that could be worth saving.

It appears that the path of information abstinence will be neither straight nor smooth. Wish me luck.