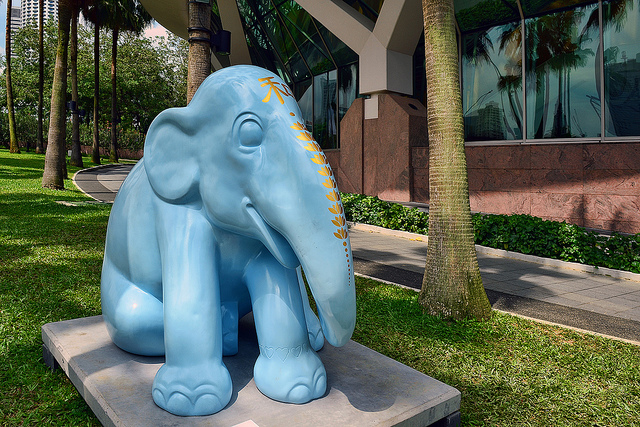 Okay, I dare you. Don’t think of a blue elephant.

Pretty near impossible, no?

And that’s what’s wrong with seeking success or any form of happiness by trying replace negative thinking and with positive thinking. Thoughts don’t obey.

I’m not saying you have to be the victim of negative thinking. Good Lord, no. I am saying that as soon as we make a project out of replacing negative thinking with positive thinking, we set up circumstances for frustration and failure.

Not the best strategy for feeling good, being resourceful, or accessing compassion.

It’s not thought that’s the problem

For example, I just thought of robbing a bank. Big deal. Am I going to rob a bank? No. Am I even vaguely interested in robbing a bank? No. (Well, maybe. Could be interesting. But it sounds like a lot of grief, so maybe not.)

My point is that thinking of robbing a bank doesn’t make me a bank robber. Thinking I could end up a bag lady doesn’t mean I’m doomed to spend the rest of the day in financial angst.

The problem is taking the thought personally

Not only do thoughts have no inherent meaning, they’re essentially impersonal. That is, they’re impersonal until we take them personally.

Imagine a three year old is throwing a tantrum because she dropped her ice-cream cone. You try to soothe her, but she’s not interested in being soothed. Instead, she pushes you away and screams that you are mean and ugly.

Now I’ve had days when I might have taken that personally, but, by and large, I don’t attach to the judgments of a frustrated three year old, and you probably don’t either. The thought that we’re mean and ugly just doesn’t get any traction, because we don’t take it personally.

We have the same opportunity when grown-ups whom we respect say we’re mean and ugly. (Whatever. You know what I mean.) We can’t prevent the thought from occurring to us, but we do have the option of not attaching to it.

But let’s be real. What about those times when we do take a thought personally and can’t seem to let it go?

Well, there’s always the option of arguing with yourself. (Been there. Done that. Will doubtless do it again. Oh well!)

The problem with arguing with yourself is that the harder you argue, the more entrenched the self that is suffering from the negative thought becomes. If you’ve tried this (and who hasn’t) you know how crazy-making it is.

Instead, I recommend the “Oh well!” solution. Here’s how it goes.

“Ah, here I am, feeling the effects of a negative thought. I hate that.

The “Oh well!” solution isn’t a technique to generate positive thinking. It’s simply a natural product of understanding how thought works. It’s a lovely alternative to talking ourselves too seriously.

The “Oh well!” solution works in your personal life and your business. It can be especially useful when you find yourself in the grip of thoughts such as that self-employment is hard or that you’re just not cut out to promote yourself.

Try it, and let me know how it works for you.
Photo Credit: Choo Yut Shing via Flickr