Getting clients is easier when you ask them to the prom 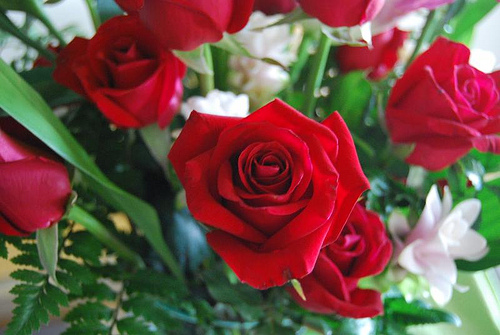 A few years ago I gave a rocking free webinar–if I do say so myself–that reminded me of the first time I got flowers from a guy.

When I was 16 I had quite a crush on Andrew Kane. It was a secret crush that I hardly admitted to myself, let alone anyone else.

Then one night, three weeks before the prom, Andrew and his friend Toby appeared at my door. I remember exactly how they looked in the light of the porch lamp.

“We can’t stay,” said Andrew as soon as I opened the door. Then, avoiding my gaze, he thrust a long white box at me and mumbled, “This is for you.” When I took the box, he grunted and said, “Well, see you around.”

O-kay. I was no social butterfly myself. I simply went in the house and opened the box. Inside were a dozen long-stemmed roses.

And then the waiting began. Because surely this meant he would ask me to the prom.
But the invitation never came. And neither of us went to the prom that year.

Back to the rocking webinar. Like the roses Andrew gave me it was a heartfelt gift. It was meant to deepen the relationship between me and my just-right clients. To build mutual knowledge, liking, and trust.

And like the roses, it was the prelude to an invitation, in that case an invitation to my home study course, The Goldilocks Strategy for Getting Clients that Fit Just-Right.
But like Andrew, I fumbled the invitation.

The webinar included some of my best stuff. So long as I was in giving mode, it went fine. I was a little nervous at first, but pretty soon my heart was full and my soul was dancing. I was totally feeling the love.

…until it was time to issue the invitation.

And then, like Andrew, I didn’t ask anyone to the prom.

The invitation was expected

Even though I put as much solid information as I could in the webinar, in one hour I could only give an overview of principles and tools that I teach in much greater depth and detail in The Goldilocks Strategy. So from the very beginning I let people know that I’d be telling them about The Goldilocks Strategy and how they could buy it.

In other words, I told them from the start that I’d be inviting them to the prom.

Then I started worrying about what they thought

While I was teaching, I was connected and present. But when it came to the invitation, I got self-conscious. Suddenly I started worrying about what participants would think when I started talking about The Goldilocks Strategy. Would they get mad because I was selling? Would they drop off the webinar? Would they unsubscribe from my newsletter and say bad things about me?

I lost connection with my heartfelt desire to invite them to try proven tools for getting clients that fit just-right. In my mind, I turned webinar participants into mean high school kids who not only wouldn’t go to the prom with me but would make fun of me to their friends.

The bottom line? I was so preoccupied with what people would think that I lost touch with what would best serve them.

So I raced through the details of the program, and I practically apologized for making a special offer.

And I went back to teaching as fast as I could.

It’s not that giving is wrong

Obviously, the point here isn’t that giving is wrong. I treasured the roses I got from Andrew, and I’ve heard from people on the webinar that they loved it. But because I didn’t complete the invitation, Over 100 people who had said they were interested never really got to consider the offer I was making. I didn’t even give them a chance to think about it and say no.

I decided not to risk rejection, and that cost all of us.

Do what I say, not what I did

I survived not going to the prom. And I survived the webinar. But I would love for you to not make the same mistake.

Your just-right clients exist. They need what you do. And they can’t take advantage of what you offer if they don’t know what it is or understand how they can have it.
It’s your job to get to know who fits just-right. Then you need to bring them roses. And then, you need to invite them to buy from you.

Because your people want to go to the prom.