Guest writer: What to do at the crossroads of Conditioning and Calling 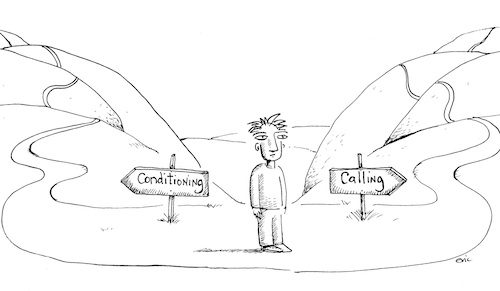 I’m delighted to again share with you a piece by my friend Eric Klein. Eric is one of the few people on the planet who is both a lineage holder in a 5,000 year yoga tradition and a best-selling business author. He rocks.
Imagine walking down a hot dusty road, when you come to a crossroads. There’s sign there, but the lettering has been bleached away by the sun. The road divides . . . you have to choose. But, how can you choose when you’re at the crossroads in life?

The crossroads is an uncomfortable place to be.
At the crossroads, you know you’ve got to make a move. There’s pressure to get going, start doing, initiate action, and forge ahead. But, without well-lit sign posts, what will inform and motivate your next step? You only have two choices.

At the crossroads, you must choose between the paths of Conditioning or Calling.

Both paths are open to you. That’s the uniqueness of the crossroad. When you arrive at the crossroads, you enter a liminal, in-between-place – that heightens your awareness.
In one ear, you can hear the voice of your Conditioning. In the other ear, there’s the voice of your Calling, Both beckon you. Which will you choose? That depends on how slowly you proceed. Slowly? Yes, slowly.

Because these two pains are very different from each other.
By taking your time, by slowing down, you’ll be able to distinguish the pain of Conditioning from the pain of Calling. On the surface, they’re similar. Both generate pain. Both hurt. But, in fact, they’re not the same at all.

What is the pain of Conditioning?
Conditioning creates the experience of pain, whenever you stop acting in accordance with your . . . um . . . conditioning. Here’s how that works . . .
*Growing up, you were taught what was expected.
*You were taught what you needed to do in order to survive and be part of your family, school, religious community, and peer group, etc.
*You were given precise messages – both verbally and, more powerfully, non-verbally – by authorities. parents, teachers, coaches, and even the media.
* They taught you how to act, to fit in, and win at the cultural game.
Conditioning also imparted a more hidden message to ensure that you followed its instructions.

Conditioning can’t stand stillness or discernment.
Stillness and discernment mean there’s the chance for you to choose a direction other than the one dictated by Conditioning. This makes the forces of your Conditioning – which live inside of you – very nervous. They need you to keep moving otherwise you might start attending to your Calling.

The forces of Conditioning will keep harassing you.
They will keep sending the hidden message of unworthiness, until you do what you’ve been conditioned to do. The pain of Conditioning comes from convincing you that you’re fundamentally blowing it; that you’re a failure; a fraud; and that unless you get with the program – you’re goin’ down . . .hard.

When Conditioning is satisfied that you’re doing as you’ve been told – it relaxes.
It stops reminding you that you’re not good enough, that you don’t measure up, that there’s more to do, and that you’d better hurry up. It stops causing you pain – which gives you a feeling of relief.
But, what about your Calling?

Calling also causes pain.
But, of a different kind. Calling’s pain isn’t imposed by outside standards. It’s more like the pain and pressure that an acorn experiences as the oak tree that’s inside it starts to grow.
The shell of the acorn – that’s provided structure, safety, and security for so long – is now in the way. The growing oak tree creates inner pressure pushes against the shell. It cracks the shell open from the inside.

There’s an oak tree inside you that’s growing.
There’s something that wants to be expressed through you. It’s not an assignment from your boss, your teacher, or your Conditioning. It’s your Calling. The work that’s yours alone to do.

It’s calling you, pressuring you from the inside.
The Calling demands that you let it grow; that you allow the shell of your identity to crack open.
You can’t delegate this Calling. You can turn away from it. You can delay enacting it. You can even dull the pressure – through a variety of self-medication strategies – including following the promptings of your Conditioning.

But, your Calling will just keep growing.
From inside you. The work that is emerging won’t abandon you. The creative impulse won’t die. Your inner spirit will keep applying pressure. Which is why you need to slow down at the crossroads. So, you can distinguish the pain that comes from:
Conditioning: which tells you that you’re fundamentally flawed and offers you a path of relief.
Calling: which tells you it’s time to allow yourself to be broken open by what is emerging and offers you a path of transformation.
Ahh, transformation . . . it’s a nice word.
Even a popular one, in some circles. There’s a shorter way to spell transformation. It’s this: death. Not as appealing as the relief that Conditioning promises. At least not in the short term. But, if you look down the road a bit – you see a different picture.

Conditioning offers you relief in the short term.
But, taking the path of Conditioning guarantees:
* A perpetual struggle to prove your worth.
* Frantic activity designed to silence the voice of you’re-not-enough.
* The on-going experience of dissatisfaction.

Calling has a different offer.
Taking the path of Calling presents a different offer. In the short term, Calling offers you the death of certainty, security, and clarity about who you are, what you do, and how you serve the world.
But, in exchange for this short-term confusion, Calling offers you:
* An ever-deepening and joyful sense of your unique place in the world.
* The discovery of untapped gifts and capacities.
* An expanding horizon of awareness that dissolves the need for ego-reassurance in an ocean of gratitude.
* A profound appreciation for the oak tree that is taking shape through you.

So, the next time you find yourself at the crossroads- slow down.
Don’t rush ahead. Take your time and allow yourself to experience the confluence of pressures that swirl around and within you:
* Pay attention to the voices that echo in your head.
* Notice the emotions, the anxiety that arises in your heart.
* Feel the tensions in your body.
* But, don’t move ahead. Focus on the discomfort and sort them out.

Sort the pain and into two piles.
One – comes from your Conditioning. The other – from your Calling. Look at them mindfully. Choose with awareness. Remember, that at the crossroads they both generate pain, but down the road they take you to different lives.
* What crossroads are you at?
* What is Conditioning telling you?
* What about Calling?