#MasteryIsNotWhite: An Open Letter to the Coaching Community 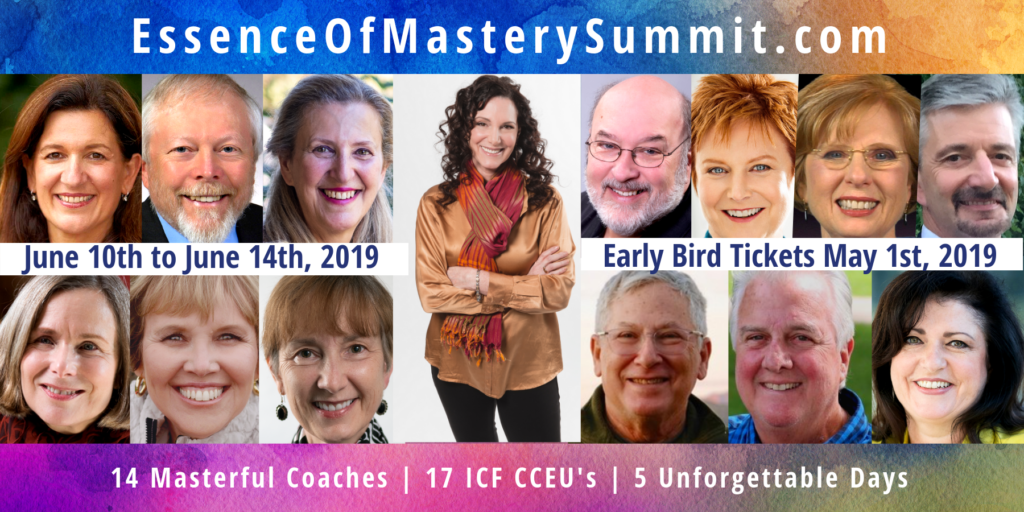 Last week I withdrew from the Essence of Mastery Summit, a series of interviews with Master Certified Coaches designed to illuminate the path to achieving that credential from the International Coach Federation (ICF). Here’s the backstory.

I’m waking up to the depth, breadth, and ripples of the lack of diversity in the coaching world and to my own responsibility for maintaining or disrupting that status quo.

Last year, when links to the Essence of Mastery Summit filled  my social media timelines, I was simultaneously inspired and disheartened: I was inspired by the idea of making the path to and standards for coaching mastery less murky and mysterious, and I was disheartened to see that every single person on the panel was white. I shared my concern in comments calling for greater diversity in conversations about coaching mastery.

This year, when Annie Gelfand invited me to be a speaker, I had no recollection of the lack of diversity in last year’s panel. I was touched by Annie’s vision of making mastery more accessible and understandable to coaches seeking an advanced credential. Caught up in my enthusiasm for the topic (and flattered to be invited to speak), I didn’t ask the right questions. I leapt at the chance to participate.

It wasn’t until promotional materials were released, including a banner featuring 14 white faces, that I had a “Holy sh*t, we’re all white!” moment. I contacted Annie to express my concern about the lack of diversity. She said she also was truly committed to diversity, had in fact set out to convene a diverse group for 2019, but that the persons of color she had attempted to invite either did not respond or were not comfortable speaking to the ICF Core Coaching Competencies.

I didn’t know what to do. I genuinely liked and respected Annie and valued her vision for the Summit.  Still, once I saw it, I could not ignore the fact that coaching mastery was being examined through an exclusively white, Eurocentric lens. Coaching is an international profession, yet there was not a single Filipino, Chinese, Japanese, Indian, or African coach among the presenters.

I made a deal with myself. I decided to use my place on the Summit as a means to bring awareness to the lack of diversity in the coach training and credentialing space. When I was tagged in a social media post about the Summit, I would comment that I was honored to be part of the discussion and concerned about the lack of diversity. In this way I hoped that I could support Annie while also advancing the cause of diversity, equity, and inclusion.

Two things occurred that made it impossible for me to maintain this compromise.

First, on May 19th, I read that Trayvon Martin’s mother was running for a seat on the Miami-Dade Board of County Commissioners. The next day I saw posts commemorating what would have been Michael Brown’s 23rd birthday. Suddenly, participating in an all-white Summit on coaching mastery looked like complicity in a system of white supremacy that was literally depriving people of color of their lives and liberty. Along with numerous other people of color, Trayvon Martin and Michael Brown lost their lives because of the bias and oppression baked into our social order. As a beneficiary of that social order, I am responsible for redressing the evils it perpetuates.

Secondly, I learned that, in 2018, several people of color had called on Annie to address the lack of diversity on the Summit. At least one coach of color recommended two excellent courses, Hard Conversations: An Introduction to Racism and Diversity is an Asset. As far as I can tell, Annie did not take one of these courses, and lacking an education in the systemic nature of  bias and oppression and how to counteract it, Annie’s attempts to convene a diverse panel this year failed.

Having made the connection between an all-white panel on coaching mastery and the deaths of innocent young Black men and realizing that a friendly intervention last year had not been sufficient to effect change, I decided I needed to formally withdraw from the Essence of Mastery Summit.

To cultivate diversity, we need to actively examine and dismantle the system that prevents it. We must ask ourselves: What is it about coaching, coach training,  and mentoring, at least in the International Coach Federation (ICF) tradition, such that we see so little diversity in conversations about mastery?

I think there is a tendency to presume that the values, standards, and competencies we’ve developed in ICF are inherently right, complete, true. We’ve worked hard over the years to articulate them, and we are understandably protective of our work. But if you poke even a little around the edges of our in-group, you will find people of color who have been marginalized, overlooked, or excluded from the discourse about what coaching is, let alone what masterful coaching is. We created coaching and defined mastery in our own image, and now shake our heads sadly at the lack of diversity at the mastery level. We tell ourselves we would love to do better, but we just can’t because it’s too hard to find non-white master coaches.

I’ve heard from coaches of color who, surprise, surprise, have zero interest in jumping through hoops for a credential that (a) is not relevant to their clients and (b) was developed without their input and insight. Some would be up for it if there was any sense that the white majority was truly interested in what they (people of color) have to offer the profession. One of these coaches was quite advanced in the coach training and mentoring ranks before realizing that her employer (a coach training organization) did not think addressing the needs of people of color was relevant to their core mission. (This really happened. Wow.)

Changing this will require a fundamental re-examination of our claim in ICF to be arbiters of coaching excellence. To cultivate a truly diverse, inclusive, and equitable coaching community, we need to educate ourselves in the ways of systematic bias and actively work to dismantle it. It’s not enough to say, “Let’s open the doors so these other folks can be masterful coaches like us.” It’s patronizing AF to welcome people of color into coaching so that they can learn from us and not be at all curious about what they have to say that we need to hear.

What will it take to create a global coaching community in which every coach of every color, ability, tradition, or other dimension of human variability is challenged and supported to “coach like no one’s watching?” Because, much as I love the standards and distinctions we in the International Coach Federation (ICF) coaching community have developed over the past 25 years, to the extent that they are rooted in Whiteness rather than humanness, they do not and cannot define and contain the dance. #masteryisnotwhite

I’ll be saying more about this over the next few weeks. For now, thank you for reading. I welcome thoughtful, generative, forward looking comments and questions.