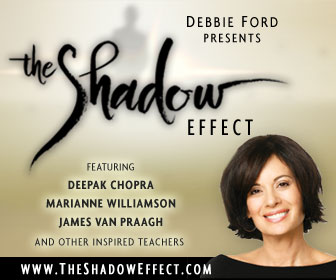 Over the summer I had the opportunity to review Debbie Ford’s movie, The Shadow Effect. Ford, you may remember, broke ranks with the forces of relentless positivity with her 1999 book, The Dark Side of the Light Chasers. In some respects, The Shadow Effect is a continuation of that work.
Here’s a clip.

A number of unforeseen circumstances prevented me from reviewing the movie when I had intended and, as a result, I had the opportunity to scan other reviews before writing this one. Of the reviews that appear in the first two pages of Google results, there were two broad categories: thrilled approval (from the school of The Secret) and cranky disappointment (on religious and political grounds).
I think both responses missed the point. The strength of The Shadow Effect is that, unlike The Secret, it acknowledges and accepts both dark and light as essential to the human experience. It is nonsense-dangerous nonsense-to pretend that we can wave a magic mantra and make darkness go away.
Some Christian reviewers object to the discussion of light and dark, good and evil, without reference to God and Satan. The resolution of the conflict between light and dark through forgiveness without reference to God raised one reviewer’s hackles. He wrote: “Sorry, forgiveness is not in ourselves, it’s by the grace of God and his Son, Jesus. They dared not touch any of this subject in “The Shadow Effect” though, its all left quite universal.” (sic) Again, this review misses the point. The Shadow Effect is not a theological commentary. It is a popularization of a concept from Jungian psychology presented in a mash-up of 12-Step Recovery, New Age thought, and cinematic technique.
The movie is filmed and scripted to make the concept of the shadow palatable without taking away its significance. It hints at ways to work with the shadow, and in the interactive edition provides eight exercises that can help individuals and groups shine a light in the dark corners of their own psyches.
One criticism that crops up both in the reviews on Amazon.com and elsewhere on the internet is that it is politically biased. Hello! Public figures such as Barack Obama and Dick Cheney, each referenced in the film, are magnets for projection. That the folks making this movie projected goodness on Barack Obama (the result, we infer, of his successful integration of the shadow) and evil on Dick Cheney (for the opposite reason) is neither surprising nor shocking. Whether one agrees or disagrees with the attribution says nothing about the validity of the message.
So what is the message? According to Ford, “What we can’t be with won’t let us be.” When we repress our darker instincts and thoughts or deny the evil we contemplate or the evil we have done, we are consigning whole areas of our experience to “the shadow.” Left there in the dark (unavailable to conscious reflection or choice), this shadow material can contaminate, even poison, our relationships and choices. The harder we try to conceal or deny the shadow, the more it seeps into our waking activities, where it can wreak havoc.
The alternative is to consciously and deliberately shine light into the shadowy corners, illuminating the secrets we’ve kept from ourselves and others, so that we can heal. Healing may involve forgiveness of self and others and making amends for wrongs done.
Depending on where you are in your personal journey this can be revolutionary stuff. The movie has the potential to awaken you to the possibility of the shadow and encourage you to have compassion for yourself and others in its grip. It makes encountering one’s own darkness more palatable. The interactive CD includes exercises you can work on your own or in groups. If you are new to shadow work, I strongly advise working with a skilled therapist or counselor. Human beings are nothing if not experts in bashing themselves mercilessly or prematurely absolving themselves, neither of which will move you along the path of integrating your shadow.
Should you get the movie? If you’ve been stoned on The Secret and other happy talk and wondering why you aren’t getting the kinds of results promised therein, The Shadow Effect may provide a crucial missing piece. If you are an old hand at working with the shadow, it can be a useful addition to your bookshelf.