Sally and the invisible visible mess 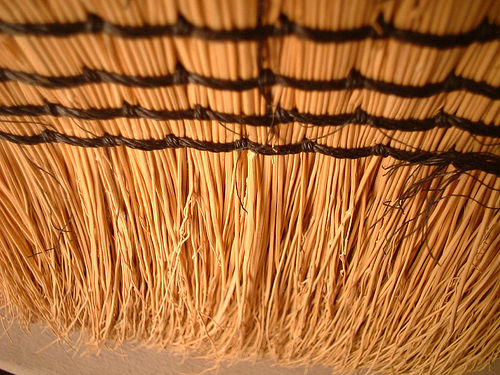 One kind of invisible visible mess is the mess that accrues in places you don’t often see. Take the front porch for example. The only person who comes to our front door is Bobby, the UPS man, on whom I have a crush. Not only do I rarely open the door to see the porch, when I do I’m looking at Bobby.

(Miles reads my articles. He knows how I am. He likes me anyway. Lucky me. But I digress.)

My point is, since I rarely see the leaves and spider webs that gather on the front porch, it doesn’t occur to me to sweep them away.

The second kind of invisible visible mess is the one that accrues in places you see all the time. The carport and the back deck are examples. The leaves, pinecones, pebbles, and webs in these areas are so familiar that they simply don’t register.

Once in a while, one or another of these kinds of mess will catch my attention. I’ll look past Bobby and register the state of the porch, or I’ll be watering the pots on the deck, which takes long enough that I really see the mess underfoot.

Do I then reach for my broom? Not hardly.

To me, they remain invisibly visible, and as a rule I think one or more of these things:

Her first mess involved taxes. She and her husband have worked their tails off to generate significant profits this year in spite of economic uncertainty. As a result they’ll have a hefty tax bill.

And that tax bill had Sally tied up in knots. Because if you have a small business, you know that any money you make beyond current expenses isn’t really extra; it’s what you need to pay the next quarter’s bills, to replace the next piece of equipment that breaks, and to tide you over when your best client goes away.

In other words, even though there was cash in the bank, Sally was afraid she wouldn’t be able to pay those taxes without incurring debt.

Sally’s second mess
Sally had a second mess. Her company web site is in serious need of a facelift. In fact, it needs a new backend, too. (Sounds like serious plastic surgery, doesn’t it?)

Sally knows from web sites. She used to have a company that built them. She knows that there is no such thing as a simple web site remodel. She also knows that revamping a web site involves what can seem like (and even be) epic coordination among designers, programmers, and owners (who not only need to scope out the entire project but also need to provide the content).

Can you spell “giant pain in the patootie”?

The visibly invisible part
It may sound like Sally’s messes were perfectly visible, and in a way they were. But they were invisible to the extent that her messes were undifferentiated. Great causes of anxiety hulking in the shadows.

So Sally decided to shine some light on her messes.

For the tax issue, that means running some numbers, but doing it on paper instead of letting them race through her head while she tries to push away anxiety. In this instance, a spreadsheet is the equivalent of a broom. (Don’t shut down because I said “spreadsheet.” For you it could be a simple list of what people owe you and what you owe them.)

For the web site project, it means making a decision to begin, then writing out what needs to happen and putting some dates to it. That gets the broom in her hands. Then it’s a matter of stepping through the project in real time and space instead of in an overheated mind.

Invisible visible messes shrink in the light
Even relatively minor invisibly visible messes like the ones on my deck, carport, and porch, exert a downward pull on our spirits. At best they are minor energy suckers, at worst huge anxiety generators. And the worst part is that we are (or feel)  powerless because we can’t get a grip on them.

But turn a light on them, pick up a broom, and the messes shrink down to size.

Some messes recur, deal with it
The messes around my house will recur. There’s already a fair amount of detritus on my back deck, the price we pay for being surrounded by stately firs. And the birches in the front yard are littering the front porch even as I write this.

I’ll be honest with you. I don’t love these recurring messes, just as there are parts of being self-employed that I don’t love. (Writing checks for example. I’m perfectly willing to pay the bills, but I hate the physical act of writing checks, putting a return address on the envelopes, adding stamps, and going to the post office. The fact that I can pay almost all my bills online only makes the chore of paying the rest by check more distasteful.)

But again I digress.

My point is that we can intervene with our messes at any point, so long as we are willing to make them visible. This week I am noticing an increase in the pleasure of being home that outweighs any effort I put into sweeping. My thought is that I will therefore be more open to seeing through the veil of invisibility that cloaks so many household tasks.

And my wish for you is that you’ll take a peek this week at the messes that may be invisibly visible in your life and business. Gently, but surely, let them register. Then choose just one and reach for the broom.

Until next week, be well.