Nothing to Fear: The Innocent Origins of Scarcity Thinking 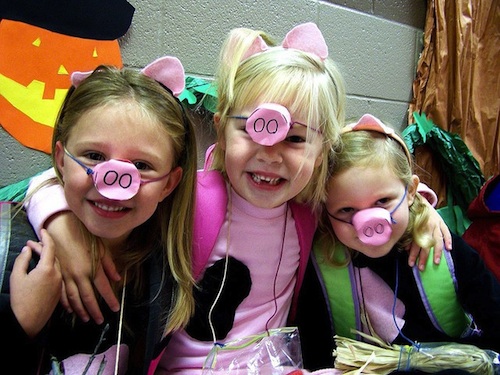 This is a revised version of a post I wrote last year. It’s updated to reflect the evolution of my understanding of what’s going on when we experience scarcity and what we can do about it.

Once upon a time there were three little pigs. When they turned 18, the little pigs left home to seek their fortune.

The third little pig discovered an abandoned cache of bricks. At first he was ecstatic. “These would be perfect for a house!” he thought. But then he got anxious.

Who owned the bricks?

What if they wouldn’t give him permission to use them?

What if they gave him permission but wanted him to pay more than he could afford?

What if he did build a house of bricks and his brothers thought that he was stuck up and a show off?

It was all too much for the third little pig. In the end he decided to live out in the open, taking shelter wherever he could find it.

One night the big bad wolf, which loved to eat little piggies, attacked the first pig’s house. Though the door was tightly latched, all the wolf needed to do was take a gigantic breath. He huffed and he puffed and lo! He blew the house down.

The first pig fled to his brother’s stick house. Again the wolf came calling. Again he huffed and he puffed and lo! He blew that house down as well.

The two homeless little pigs ran frantically into the night hoping to find shelter with their brother. Eventually they found their equally homeless brother holed up inside a sewer pipe. The three pigs squeezed into the pipe and working desperately, they managed to block the opening with a large boulder. For the time being, they were safe from the wolf.

“What a wise little piggy I am,” reflected the brother from his damp, dark hiding place. As long as I keep moving, that old wolf will never get me.

Of course it wasn’t very long before running and hiding and scavenging exhausted the three little piggies, and the wolf had himself a lovely feast.

What’s wrong with this picture?

Ask any five year old, and they’ll tell you there is something wrong with this story. We know intuitively that the pigs were supposed to have learned a lesson and lived to profit by it. Instead, we see the very pig that could have built a sturdy house of bricks turned his back on opportunity and settled for a life on the run.

How often in our own lives do we make similar choices because of scarcity thinking?

Scarcity as rationalization and protection

For years I believed that my anxieties around money were the result of being the oldest of eight kids. I would explain my scarcity thinking with a laugh, saying that I had an accountant who lived in the back of my brain and multiplied everything by ten before deciding if it was affordable. Somehow I kept a straight face while I said this, even with evidence of past and present prosperity everywhere around me.

One particular memory seemed to support my scarcity thinking. I was about five years old, and I was on the phone with my best friend, Mary. It was early evening in the fall of my first grade year.

“Can you go roller-skating?” Mary asked.

“I’ll ask,” I said, pretending to put down the phone. A moment later I got back on without asking my Mom. “My Mom won’t let me.” I said.

For forty years I believed that the reason I didn’t actually ask my Mom was that I didn’t think we had the money, and I didn’t want to embarrass her. Then one day I saw that something was wrong with that picture.

Scarcity as a dodge

Over time I found it odd that this particular memory would pop up whenever I thought about money and my childhood. Odd because there weren’t eight kids in the family at that time, so my back brain accountant wouldn’t have been multiplying by ten, if indeed she were multiplying by anything at all.

If the story isn’t as I remember it, I wondered, why would I have pretended that we couldn’t afford for me to go skating? What were the real origins of my scarcity thinking?

I only had to ask the question in order to see the obvious answer: I created a scarcity script to cover up my awkwardness, both the anticipated awkwardness of skating and the awkwardness of not knowing how to just say “No, thank you.”

A story is just a story

If you recognize yourself and your own scarcity thinking in these stories, never fear. The good news is that you don’t have to work on yourself to get free of your stories. All you need to do is recognize that they are stories. Your thinking may appear very real in the moment, but it is still just thinking.

Here are some pointers for finding ease around scarcity thinking.