The Fractal Law of Self-Employment Success and Personal Growth 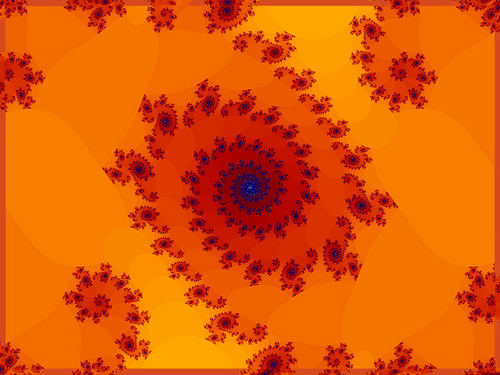 Fractals are complex, self-similar shapes that repeat fundamental patterns at ever increasing and decreasing scales. When you magnify a segment of a fractal, you will find a repetition of the shapes you saw at the larger scale. Magnify it further, and the same pattern will again emerge in infinite complexity with self-similar fidelity. Conversely, zoom out, and you will see the same patterns emerge from an eagle eye view.

Think of your beliefs, behaviors, and habits as part of a fractal, a pattern that tends to replicate either success or failure. Every aspect of this fractal shapes and is shaped by every other aspect, just as your attitudes, aspirations, and ways of being shape the large and small actions you take each day and vice versa. The sum of these actions and states of being are what attract or repel opportunity and disappointment. (Yes, you can attract disappointment. In fact, if you are not paying attention, you can get quite good at it!)

In this way, the image of the fractal can illustrate why it is who we are being far more than what we are doing that determines success and failure. In this sense, fractals are a metaphor for how small changes can result in great success and personal growth.

Here’s an example from my files of fractals in action. The client’s identity has, of course, been changed.

Margaret was frustrated because, in spite of a concerted effort to market her art, she consistently attracted people who did not want to or could not pay for it. Her experience was that the people who liked her paintings could not afford to buy them at prices that would allow Margaret to support her family. She felt stymied in her search for success.

As Margaret became aware of her beliefs about the value of her work and the relationship between art and money, she realized that she believed that art patrons only valued work by dead painters. Further, she noticed that she harbored some resentment against people who had enough disposable income to purchase on fine art.

Margaret practiced just noticing her beliefs and emotions without trying to change them. She realized that her unconscious patters resulted in thousands of subtle shiftsof speech and body language (not to mention attitude) that infallibly contributed to the very outcome she complained about. In short, she felt alienated from her best customers.

What’s more, Margaret noticed that she tended to apologize for her prices and to assume that people would think they were too high. She would propose a reduced price or barter before her prospects ever had the chance to discover for themselves the value of her work. These patterns stopped both personal growth and business success in their tracks.

Once she became aware of these patterns, we looked at them together. Coaching was critical at this juncture to prevent her from falling into the trap of self-criticism. Margaret saw the fractal relationship between her own beliefs and behaviors and the results she was getting. Seeing this relationship energized and inspired her, for it demonstrated how powerful she was. She was already producing results in the outside world that precisely mirrored her inner state.

Margaret began to play with new ways to think about and embody her offer as an artist so that she could create different results. She sought out examples of living artists who were successful. She looked for stories about people of substantial means who used their material wealth to bring joy and beauty to their own lives and their communities. She got curious about how it would feel to have patrons like that. Within a few weeks she sold three paintings at twice her usual prices.

Test the law of fractals in your life. Think of a situation in which you are being consistently frustrated. Describe it in a sentence or two. What is it you want and how is that desire being thwarted?

Now, imagine that this thwarting of your desire is part of a pattern that emerges from underlying beliefs and behaviors in you. This is no time to indulge in beating yourself up. Simply observe what is so. In what ways are you not surprised by the results you are getting? In what ways can you notice yourself somehow stepping back from or getting in the way of the results you want? (One way to reveal hidden beliefs is to state the problem as you see it and add the phrase “and this means…” For example, “There isn’t enough work to go around and this means I might as well not even try.”

Notice how these beliefs and behaviors are “self-similar” with the very results you dislike. Let yourself feel this direct connection, because in feeling this connection you will also experience your power to manifest results. Rather than trying to change your beliefs and behavior, just be curious. What would it be like if you felt differently? What would it be like if you no longer had your negative thoughts?

Cultivate lightness as you play with the possibilities. After all, one sure way to get stuck is to gun your engine and spin your wheels. Once you begin to play with different ways of being you will have already disturbed the original pattern and things will begin to shift of their own accord.

A final word: this is not magic, it’s life. Let these images and laws live in you. Remember, it’s not about what you DO so much as it is about how you BE.

Profit Alchemy is an integrated, intensive, transformative nine-month program that shows you step-by-step how to make a profit at self-employment. Click here to learn more about Profit Alchemy.