Empowerment: a realistic alternative to the drama triangle 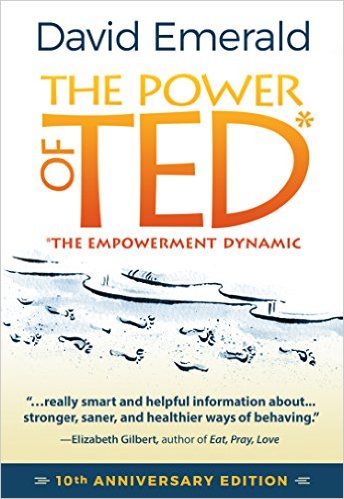 Empowerment. It’s one of those words that have been so ill- and over-used that it almost connotes its opposite. Therefore, it was with a certain amount of skepticism that I first looked at my friend and colleague David Emerald’s book, The Power of TED* (*The Empowerment Dynamic): The Key to Creating an Extraordinary Life. TED, or the Empowerment Dynamic, is an alternative to the classic Drama Triangle, with its roles of Victim, Persecutor, and Rescuer. It provides a pathway for shifting from those dead end roles to three roles rooted in the Creator Orientation. Not only did the model overcome my skepticism, it made such an impression that I readily endorsed David’s book.
As I said in an earlier post, I’ll be sending The Power of TED* to my clients for a long time to come.

PS When you get your copy, be sure to read the acknowledgements!

PPS Stephen Karpman, M.D., the originator of the Karpman Drama Triangle who, after over 30 years of declining invitations to endorse others’ work, says: “The Empowerment Triangle is a highly original and effective escape from the Drama Triangle.”