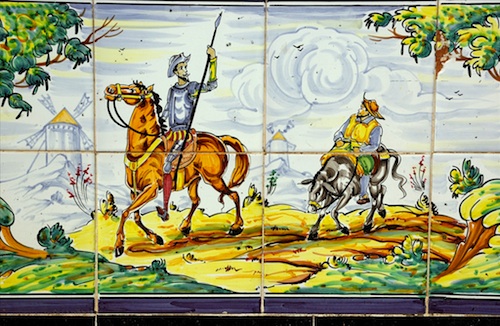 In Cervantes’ classic tale, Alonso Quixana, a humble farmer, summons his considerable courage, and under the name Don Quixote de la Mancha he sets out to defeat the forces of evil. In one classic scene, the magnificently deluded hero takes on an army of ferocious giants, in reality a field of windmills.

And don’t you know? Most of our efforts to defeat financial security amount to the same thing. With the best intentions in the world, we tilt at windmills, while overlooking the true source of our problems and their solution.

With the best intentions in the world we work to shift limiting beliefs. We boldly challenge the windmills of laziness and lack of focus. We do brave battle with our family histories.

There’s no question of our courage or sincerity.

But we might want to take a second look at our premises.

Financial security arises from the inside out

What I’m about to say may not come as a surprise, but if you’re tilting at any of the aforementioned windmills, you haven’t fully seen the implications.

Financial security is an inside out proposition.

It has nothing to do with your bank balance or credit card debt. It’s not the result of discipline or the product of your childhood training.

It’s 100% the product of your moment to moment thinking.

By definition we recognize that a limiting belief has no inherent validity. We understand that it’s a thought. But because it’s got some momentum behind it, because it has become familiar, we think it has more significance than other thoughts.

But it doesn’t. It’s still just a thought.

When you see–really see–that limiting beliefs are simply thoughts like any other thoughts, you also see that you don’t have to work on yourself or your circumstances to get free from them.

After all, when you see that the giants are windmills, you don’t have to work on yourself to stop doing battle.

When we’re in the grip of financial insecurity, trying harder only makes it worse.

Most of the mistakes we make about money are rooted in wishful thinking or fear, and often both. We try so hard to get it right–or worry so much about getting it wrong–that we can’t think clearly.

When instead we see that financial insecurity is an infallible sign of insecure thinking, we can step back, do the sensible thing, and stop trying to think our way out.

And as soon as our thinking settles down, wisdom and common sense will suggest the simple next step.

Memories are simply thinking in the present about what we thought we experienced in the past. When you see this, sorting through your family history as a way to resolve financial insecurity doesn’t make any sense. There’s nothing to sort through when you see it as thought. Or thought about thought.

As the saying goes, there’s no there there.

(And what a relief it is to drop that drama, eh?)

Financial security is rooted in your innate wellbeing

The only real security is the security that comes from recognizing your innate wellbeing. The wellbeing that is always there underneath the sturm and drang of the human experience.

The sun that never goes away no matter what the weather may be.

When you remember that you are always okay, that the only thing that can obscure your wellbeing is thought, you know where to look for your security.

You can use your sense of wellbeing as a touchstone or a compass with which to navigate your financial life.

This isn’t about living in la-la land

You might be concerned that navigating your financial life by means of a peaceful feeling means abdicating responsibility. That you’d be living in a la-la land.

Don Quixote lived in a fantasy world in which he believed windmills were giants. We live a fantasy world when we believe that our security rises and falls with external circumstances.

But when we see that security is an inside job, we stop tilting at windmills. We will still experience ups and downs related to money and wealth. That goes with being human. But we won’t need to be terrorized by our thinking.

We’ll still see giants from time to time, but more and more often they will look suspiciously like windmills.