What kind of juggler are you? Integrating dropped balls with grace 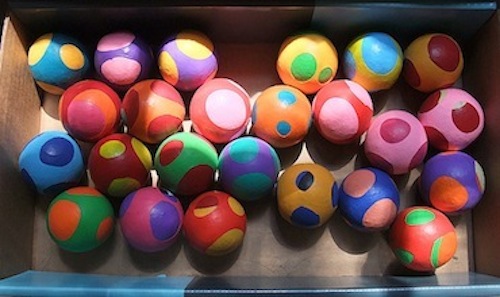 We all know what it’s like when you have too many balls in the air. You drop a ball here, forget an appointment there. You make dumb mistakes.
And then? You feel embarrassed. Maybe you get apologetic or defensive. And, of course, you try to pick up the dropped ball.
Often, even if you succeed in picking up the ball without dropping another, you end up scrambling. You try to get back into flow by working harder, which makes you edgier. And you drop another ball.

When juggling goes right
In contrast, a really good juggler is the picture of grace. Balls, pins, handkerchiefs, oranges fly through the air in perfect arcs. The juggler catches each item at just the right time so that the others remain in fluid motion.
But think about it: Rarely do you see a perfect performance. Even the best jugglers drop the occasional ball. They fumble a throw.
But somehow they get away with it. They keep going, and we don’t get tired of watching them. We don’t ask for our money back. What’s up with that?

Great jugglers practice success *and* failure
The best jugglers practice over and over again, creating the neural pathways and muscle memory that lead to expertise. In the beginning, they’re not very good. (They might even be very bad.) But they persist.
The keep practicing until those pathways and the resultant muscle memory virtually guarantee success. But a really good juggler knows that that guarantee is not absolute. So she practices failure as well as success.

Failure and two kinds of juggler
There are two very different ways to juggle. The one you choose directly affects how you embody failure. And the way you embody failure determines your success as a juggler. You get to choose the vicious or the virtuous circle.
The first kind of juggler is self-centric. You’re preoccupied with what you are doing and how you look. When you drop a ball, you take it personally. Your self esteem rises and falls with the caliber of your performance.
When you’re a self-centric juggler, failure feels awful. It’s all about you, what you’re doing, how you look, what other people think about you. The natural response is to tense up. To hunch your shoulders or duck your head. It really messes with your juggling.

It’s a matter of style
The difference between a really great juggler and a poor juggler is that the great one integrates failure into her performance. No apology. No scrambling to recover. Just a fluid, flexible adjustment to the new reality.
And when things really go kaddywompus? Instead of freaking out, they take a bow.